The Pearlscale is the only Goldfish variety with differently shaped scales. Rather than having the long slender body of the common Goldfish, the Pearlscale Goldfish has a fatter shape with a bulging middle. There is a hard, white, raised area in the middle of each scale and dark perimeters. It looks like a white pearl hence it is aptly named as Pearlscale.

There is only one dorsal fin and all other fins occur in pairs. Its dorsal fin stands erect on its back. Caudal fin should be forked and held high horizontally. The other fins of Pearlscale are paired with ends that are rounded, with lobes that appear forked at the tips. Whenever Pearlscale swims, these lobes often wave upwards instead of downwards. Its head has a triangular shape, some varieties have a bulbous cranial region.

They have a straight back with a swollen belly, resembling a golf ball. Depth of the body is at least 2/3 of the body length. 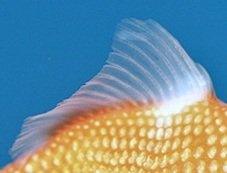 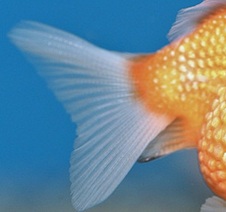 The caudal fin, or tail fin, is used by the goldfish to move forward. These fins be different depending on the type of goldfish. Some goldfish have a single tail, while many fancy goldfish have double tails. 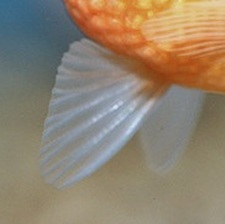 The pectoral fins are located on both sides of the goldfish just under and behind the gills. Pectoral fins in goldfish are used for forward and backward movement. During the spring months male goldfish will develop breeding tubercules along the leading ray of the pectoral fin, which can be stiff and thick. 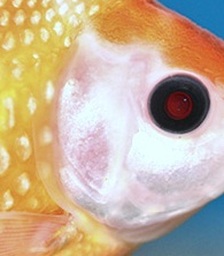 The gills are the part of the goldfish that are used for breathing. The opening allows water to flow out of the mouth, past the gills, for breathing. During the spring males can be easily identified by the breeding tubercules that appear on the gill covers.

Most goldfish can see well, but some breeds that have telescoping eyes can have very poor vision.